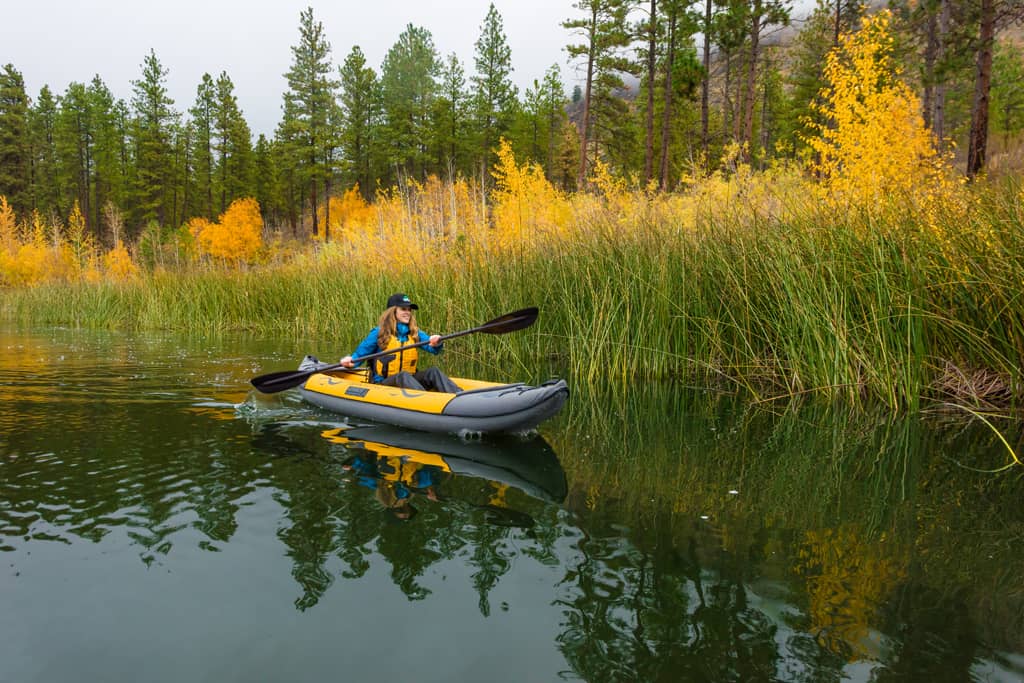 It also serves as a pretty good fishing kayak to boot!

Both Kayaks feature great durability and are manufactured well. Where they they begin to separate is down to what you are using the craft for. If you are planning on using this craft for calm waters and want some decent tracking ability I would go with the Advanced Elements Island Voyage 2 inflatable kayak. If you want something that can handle almost all of what nature can throw at a craft then it is best to go to a sea eagle 330 or 370.

This kayak has a depth of 38 inches giving it a low center of gravity. This has some advantages and disadvantages.. The advantage of having a low center of gravity is that wind will not push you around as much. The disadvantage being that if you are a shorter person you have to adapt a  higher angle paddling stance. The on water performance of this craft is pretty good and tracks well. The Removable tracking fin definitely helps the tracking performance of this craft. Without it you have to do more on water correcting. You may have to play around with the setup of the seat position a bit to get the most performance out of the kayak.

The Advanced Elements Island Voyage 2 inflatable kayak can be used as a tandem or a single kayak. It’s on water performance is greater when it is a tandem as the craft seems to track better when more weight is added. It’s pointed bow and rocker helps the maneuver more smoothly in the water.

Most Customers were very pleased with what they got with the Island Voyage 2 inflatable kayak.  Some of it’s strengths detailed was its tracking ability, and how easy it is to get in and out of. Many taller people who reviewed this boat stated that they used it comfortably as a solo kayak but found it a bit uncomfortable with another person in, specifically another taller person. It is great as a tandem for father/ son mother/ daughter type of trip ow for two smaller people as said before it tends to wobble less when it is weighted down.