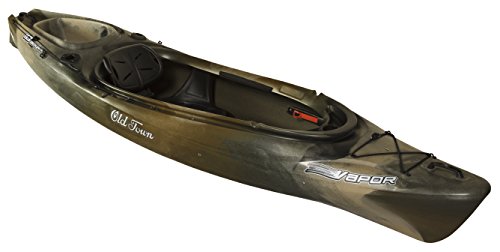 Old Town is a respected brand that has been around since 1898! The Vapor 10 Angler passes on that tradition with its unique open cockpit specifically for the angler in mind.

The Vapor 10 Angler is great beginner angling kayak for two main reasons. One It’s price tag is very affordable and two, it offers a stable platform to fish out of. The stability is due to the Rounded Hull which makes the kayak almost impossible to flip. This stability makes this one of the better beginner recreational kayaks out there!

The Vapor 10 Angler also has more of a open large cockpit feel to it. It helps you be less confined when you fish. For battling bigger fish it is actually a pretty ideal kayak. The stability allows you to always stay in control without having second doubts as to if the kayak will flip over. Infact some customers have actually fought sharks in the 3 to 6 foot range just in this little kayak!

This is also one of the more rugged kayaks out there. Old Town is known for using quality materials in their water crafts. You can have the confidence of going over obstacles and not having any dents inside the boat.This is thanks to it’s built in skid metal plate that insures your kayak offers durability.

It’s on water performance is good as well. Obviously stability is the name of the game in fishing kayaks but it’s tracking performance is not half bad either. Where this boat is most lacking is in speed but most fishing kayaks are not geared to win races. Still it would be nice to catch up to your friends that have a V hulls.

One of the things that really stand out with the Vapor 10 Angler is the fact that this kayak actually comes with a mini anchor and trolly! Rarely do you get that with  lightweight recreational kayaks, let alone budget kayaks! This is a great feature to have specifically if you are trying to fish in a particular location and don’t want the wind to push you off range.

Other features that this kayak has is a tray that features room for loose tackle and a beverage (really.. what’s fishing without a beverage!). It also has a paddle rest holder that is located towards the top of the cockpit. The bow of the kayak features the anchor system, flush mounted rod holders and a live tankwell where you can put some gear or bait fish if you so pleased. 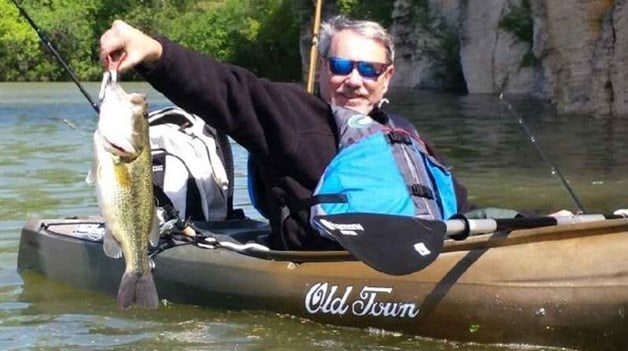 Overall this is a highly rated kayak amongst yak angler enthusiasts! Many people marvel at its stability and it’s ease of use. This kayak seems to be particularly popular with bigger guys because of its open cockpit design. Some other notable positive comments include how light weight and easy the compact kayak is to carry, specifically if you are on your own and the fact that the footpegs and backrest is adjustable. Many others liked the fact that this kayak came with an anchor and found it particularly handy for fishing in one spot.

Some of the more negative comments were mostly directed towards the fact that the seat gets uncomfortable after 3 or so hours for some people.  Other people have stated that you need to put in more work to keep up with other kayaks.

Speed/Tracking: This kayak is not very fats whatsoever and questions about tracking ability arised
6/10