One of Sun Dolphin’s Budget models this kayak actually features better ratings than many of its cousins! Find out why below 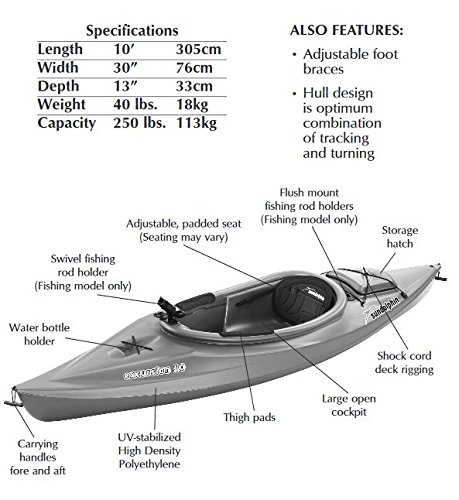 The Sun Dolphin Excursion 10 is a fantastic starter kayak for the fisherman trying to get into kayak fishing. Chances are if you are on this page you know this kayak comes with a more than fair price tag. So is the Price Tag an indicator of it’s quality? Let’s look at the Excursion 10’s  on water performance.

The Excursion 10’s on water performance is worth the price that you will pay for this kayak, it’s manoeuvrability is pretty good, it’s stable and its tracking is not too bad for a fishing kayak. This kayak behaves best in calm waters similar to many Sun Dolphin models out there. I would, however not recommend this kayak for coastal waters as it’s Hull is not designed for those kinds of conditions as it would be pushed around by bigger waves. You will also have to work harder than other kayaks to battle against the current. The Sun Dolphin Excursion 10 is geared more towards people who are getting started in kayaking. Beginners often value primary stability over speed, especially beginner fisherman.

Considered as one of the better Sit in Kayaks in term of fishing the Sun Dolphin Excursion 10 is great for the minimalist fisherman who does not require a ton of gear.  Some of the Excursion 10’s features include three rod holders, one swivel mount holder in the front of the cockpit and two flush mounted holders in the rear of the kayak. While there are not a ton of bells and whistles that are featured on the excursion 10 it does have a rear storage hatch that can hold tackle as well as some storage space inside the cockpit of the kayak where your feet go should you want to bring more gear. Other feature provided include a water bottler (or beverage) holder at the top of the kayak, bungee paddle holder on the side and adjustable foot braces to place your feet.

In Terms of a fishing kayak many customers had very few bad things to say. Many first time kayakers praised the Excursion 10’s stability in calm waters and were very happy with the price that they had payed for it. Others have stated that they have had this kayak for a long time and have even caught Northern Pike and Bass that are 20 “ and up!

In terms of quality this kayak actually seems to be less in question than other Sun Dolphin kayaks which, I find a bit Ironic as this is one of the cheaper models that Sun Dolphin has to offer. Lots of people have purchased this kayak on a deal so keep checking the banner below to see if there is a sale on the Excursion 10.

Most of the complaints directed towards this kayak had to do with the lack of seat bottom and the placement of the flush mount rod holders. The lack of a seat bottom limits the time that you have to fish as your butt will get a bit sore. A simple solution is to just get a pad or pillow and bring it out while you fish. If you look at where the flush mount holders are placed on this kayak you can see they are further towards your back than arms which makes it a bit difficult accessing them. Many other kayak manufacturers place the holders closer to the edge of the kayak for easier access. 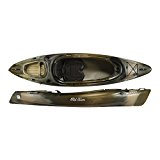 Speed/Tracking: This kayak is not very fats whatsoever and questions about tracking ability arised
5/10