Best Inflatable Kayak for the Money


Best Fishing Kayak For the Money 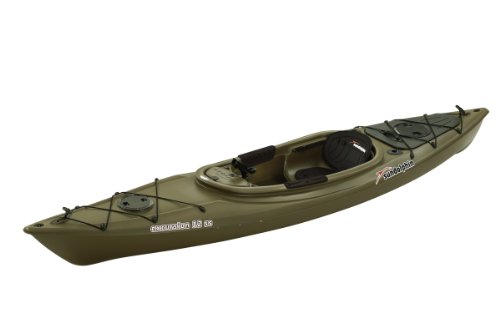 One of the main characteristics that make a good fishing kayak is that it is a sit on top. So why are we mentioning a Sit in Kayak for fishing? Good question! Read on below!

Sun Dolphin is a fairly well known kayak brand. Chances are if you have ever been to Costco and have seen a kayak hanging up at one time or another, it was usually a Sun Dolphin.

So what makes the Excursion 12 ss a good fishing kayak? Well for one it has a lot of storage potential, specifically dry storage. Not only can you throw some of your bigger gear in the stern between your legs but it also has a P.A.C.. What is a P.A.C.? It stands for a Portable Accessory carrier. It is a storage unit that fits in the stern of the boat where you can use as dry storage. It features a handle and a hatch where you can store things such as valuables, fishing accessories, tackle boxes, phones or life vests. An additional storage hatch can be found in the Stern Hatch. There is also additional tackle storage below the swivel rod holder.

The Excursion 12 ss features two flush mounted rod holders towards the back of the seat and one swivel rod holder at the top of the cockpit. This is a pretty standard feature with sit on top fishing kayaks but is more rare to come by with sit in models.

A great  feature that makes this kayak stand out from other budget sit in models is the fact that it has a raised seat, padded though braces and adjustable foot pedals! You typically see these features in more expensive kayak models. This kayak also is rated pretty highly by taller people as it gives enough room for them to be comfortable and the thigh pads avoids bruised knees!

The Excursion 12 SS water performance is pretty good as well. It tracks well is calm waters but is maneuverable enough to get into knocks and crannies that other kayaks have trouble getting into. The knock on this kayak though is that it is a bit of a boat (get it?.. Ok I’ll stop) in terms of handling in swells  and waves. It’s safe to say this is a great kayak for calm lakes but is not the best for unpredictable coastal conditions.

Customers were overall pleased with the kayaks stability and on water performance. A common positive among customers also seems to be it’s storage capacity. Some people even used the P.A.C. as a live well while they tied it to the back of the boat! Many tall customers came out of the woodwork to praise the Excursion 12 SS for being spacious enough to fit into with having to worry about stability.

Most of the Negative comments were directed towards the kayaks plastic. Many though it was cheap and could dent easily. Other noted that it was a bit difficult to handle in rougher coastal conditions. Safe to say it is best to keep this yak in calmer waters like lakes.

Be one with nature now

Get the Latest Watersport Information and Deals Now

no thanks, i'm good