We may earn a small commison by purchasing a product through our link. We do this at not extra cost to you. Learn More here… 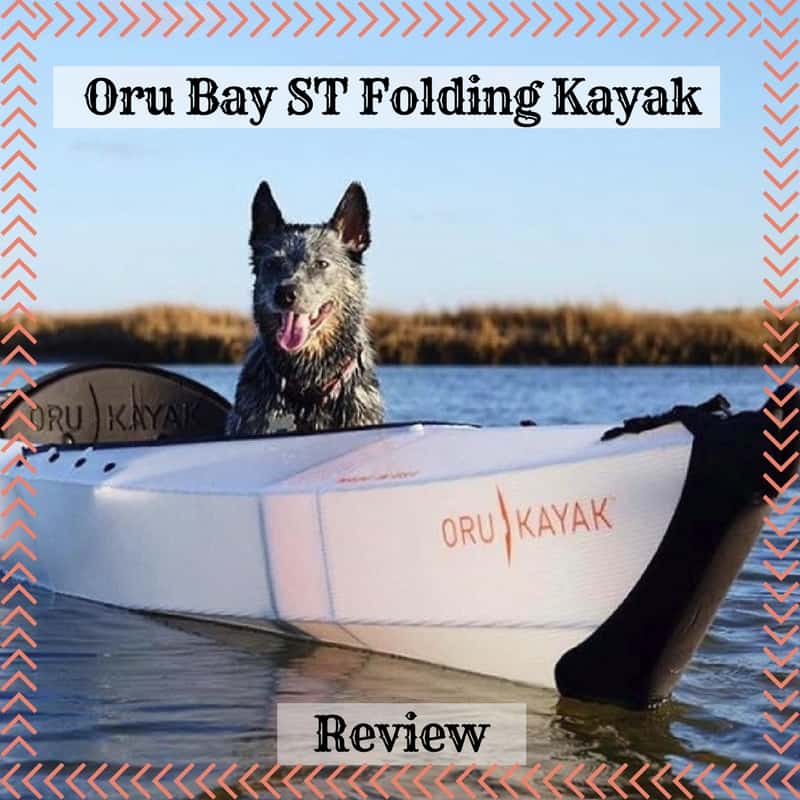 Before the Oru Bay Kayak ST you had three options. Get a hardshell kayak and figure out how to transport/ store it, get an inflatable kayak and pray that you do not get a leak or get a modular kayak and still have something that takes up a good amount of space.

Oru has successfully managed to take the best aspects of all three and put it to use in one kayak. The result is actually pretty impressive considering the hardships that you can get from the different types of kayaks.

Who is the Oru Bay ST kayak for?

Who is the Oru Bay ST not for?

Oru’s main vision has been to blend the two worlds of Kayaking and Oragami together. Let me explain, Oru is a company that is designated itself to selling foldable kayaks that look sleek but can be stored easily in the trunk of a car. Their inspiration behind this was looking at the collapsible kayak industry and seeing a gap in affordability.

Oru is a relatively new innovative company that got it’s start through a wildly successful kickstarter campaign. Infact, the company ended up raising 443,806 which blew its originally pledged $80,000 goal out of the water! They were not finished there. They ended up appearing on an episode of Shark Tank and getting a deal of 25% of the company for $500,000 with Robert! Episode Below:

Since then They have gone on to produce three different models! The Coast XT, Beach LT and the Bay ST which will be the model I will be reviewing.

What is the Oru Bay Kayak used for?

The Oru Kayak Bay is a revolution in terms of folding kayaks. Many Folding kayaks that are on the market are very expensive and can range anywhere within the $3,000-$5,000 price range. As seen below the Oru is much more affordable and actually outperforms many other “compact” kayaks including inflatables in a wide variety of tasks. These tasks include on water performance, ease of setup as well as comfort.

This is the Original Oru Kayak that started it all, it can be used is a wide range of different conditions. From the outside it may look a bit flimsy but this kayak is actually very durable and is more than capable of handling class I and II rapids.

The Bay series is meant as an all around kayak that is stable enough for beginner paddlers but can hold more than its own for Paddlers who are more experienced.

The Oru Kayak Bay actually tracks better than many recreational branded kayaks because it’s pointed shape slices through the water with little correction needed. The turning radius on this kayak is also quite good for a 12 foot boat! 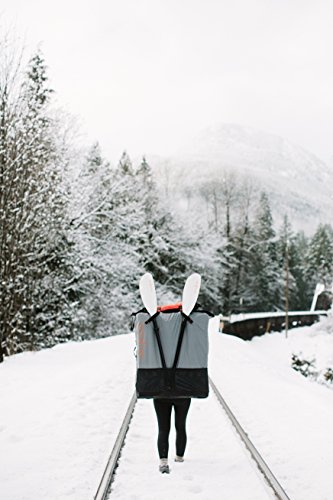 Traveling to somewhere nice but you want a bag that can fit it? Look no further than the Oru Pack! It features padded shoulder straps and a hip belt for maximum support, two handles at the top and side for more grip. It also features heavy duty zippers, exterior mesh pockets for a two piece paddle and compression straps for extra gear you may be bringing. 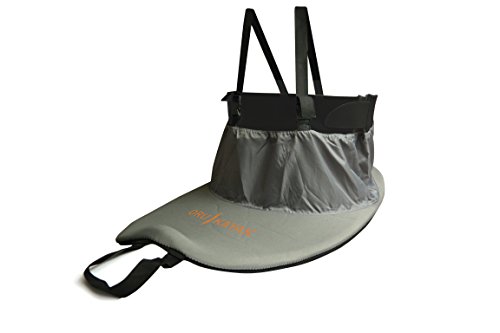 A custom spray skirt to fit onto Bay and Coast models of Oru kayaks.  Made from neoprene these spray skirts provide a comfortable fit with an adjustable waistband and suspender straps for those harder class I and II Rapids. It also features a Grab Loop for saftey reasons and stays strong in all conditions. 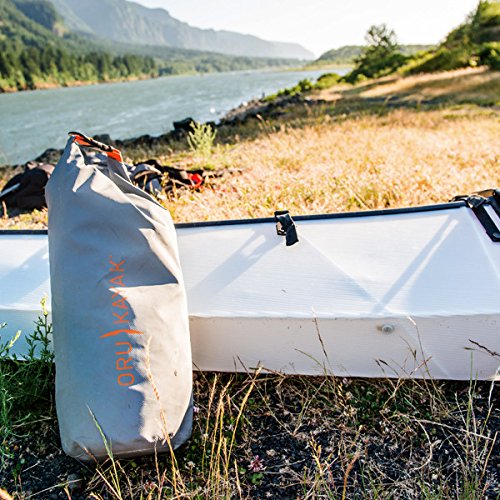 Made out of 500D PVC tarp material it keeps all of your valuables dry and is completely water tight when used properly. It is double stitched, seal seamed and has a reinforced bottom to keep everything safe. 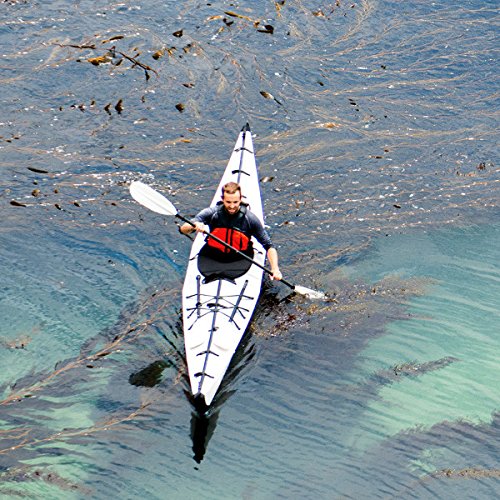 This kayak can handle a wide array of different bodies of water. The Oru Bay Kayak is most at home in calmer waters such as lakes and bay but can handle its own in class I and II rapids! It can also handle some surf but I would not test it through treacherous conditions.

The Oru Bay Kayak is ideal for day trips but has been tested for multi day trips and seemed to survive the trek! This kayak can handle bigger bodies of water but is also light enough to maneuver in smaller rivers and ravines which gives it the quality that a solid all around kayak should have.

Customer Feedback on the Oru Bay Kayak has been generally Positive. Read some experiences below

A common theme with the Oru Kayaks seems to be that Customers are usually generally impressed with its performance on the water. Many customers have raved about how it has exceeded expectations in that regard. Some have even gone on to say that they have owned many kayaks over the years and this one has been the best! Other Positive comments about the Oru Bay Kayak has been:

With Positivity sometimes one finds negativity. Most of the negative comments directed at this kayak had to do with direct orders. A lot of people gave this kayak a one star review based on the poor customer service from Oru. Which I believe is a bit unfair but that’s just me. Most of the comments had to due with how long the shipping process was and the fact that no customer service reps would update or respond customers on how long the order would take or what its status was. To avoid this buy from an established online retailer ;).

Negative comments that did not have to do with orders included: 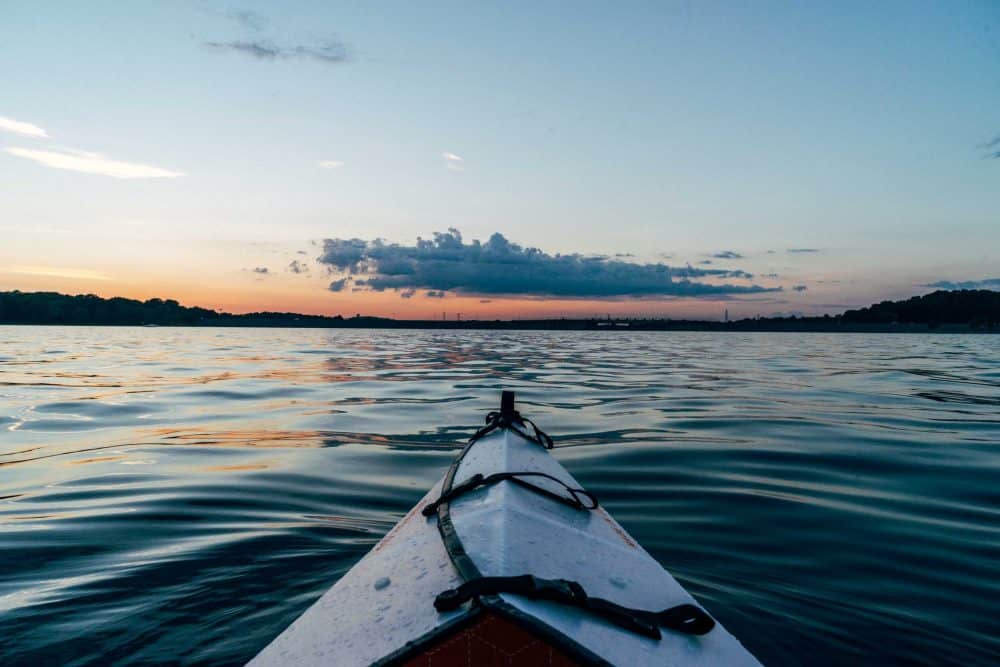 The Oru Bay Kayak is a great innovative kayak that has really taken off. Maybe not to the same extent as fellow Shark Tank participants Tower Paddle Boards but it has solved a lot of problems. Many people want to buy a kayak and get into kayaking but they do not have space to put it or simply they do not trust inflatable kayaks. If you sound like one of those people then chances are this kayak is for you!

The Oru Bay Kayak is an overall solid water craft! It tracks well, maneuvers pretty easily and it is also accelerates well thanks to its light 28 lb build! This kayak thrives in calmer waters but can for the most part hold its own in class I and II waterways as well as some surf.The durability of this kayak is pretty impressive although it is not completely scratch proof.

Putting the kayak together can be a bit hard to figure out at first but once you get the hang of it it’s relatively straightforward. Be warned that the folded Oru kayak is bigger than your typical folding inflatable kayak and will therefore take up a bit more space. It can however still fit in a trunk or the back of a truck or even in a closet relatively easily though.

The main complaints directed at the kayak are not so much about the kayak but more ordering it directly from the Company itself. Customer Service seems to be hit or miss as well when it comes to ordering from Oru. To avoid this its good to order from an online retailer that is able to provide customer service. If you click the link below you will have a hassle free time ordering this kayak.

Overall this is a great kayak at what I believe to be at pretty fair price when you compare it to other models both in the hardshelled and Inflatable/ fold up category. 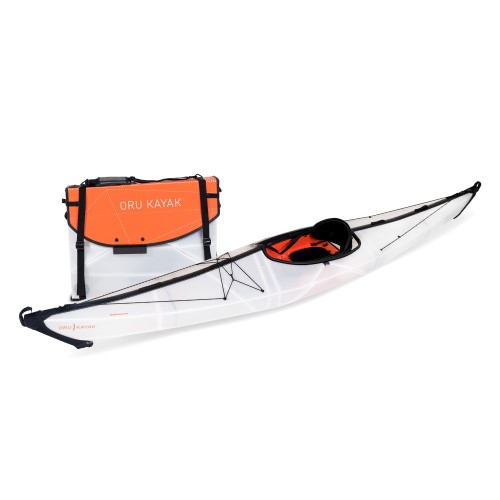 Step 1: Loosen and remove the shoulder straps from the side of the box and place them in a safe place. They are not necessary for kayaking but are essential for putting the kayak back into box form.

Step 2: Unclip the two buckles from the sides of the box and Remove the Orange Cover. The Cover will be placed on the cockpit floor down the road as the floor board.

Step 3: Dig inside the “Box” and remove the six Zipper Channels, stern bulkheads, back rest and kayak seat pad. Next unclip the center strap and unfold where the two orange stickers are and lay everything flat.

Step 4: With the box transforming into a long sheet grab the female and male ends attached to the footrest and connect them. 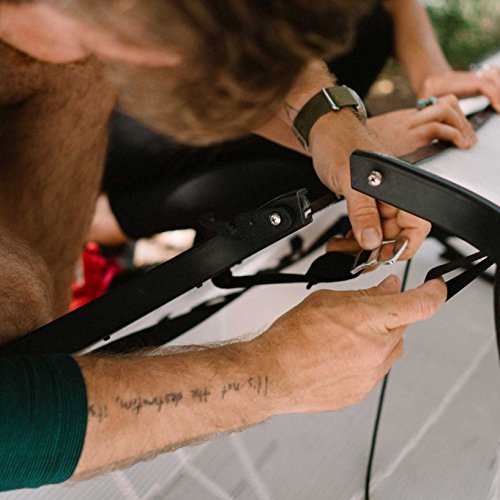 Step 5: Close up the Bow and Stern by folding them and tightening the straps at each end. Next you insert the Stern and Bow Bulkheads into the U channels on the floor of the kayak. (On Either side) 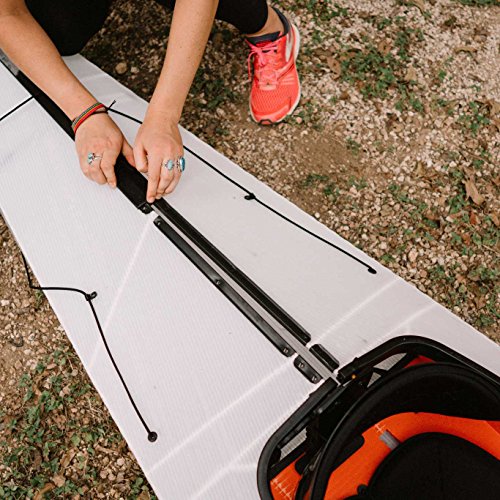 Step 6: Do the Bow First!: Attach the Front Zipper Channel located at both ends of the cockpit. Attach combing latch and guide the six (3 on each side) Zipper channels onto the deck trim at the tip of the bow. Do not force it if it does not go, Oru provides lubricant that will help it glide along the channels gently.

Step 7: Fold Floor Board into a U shape and place it on the floor of the cockpit. Next Flex the middle of the floorboard upwords to form a “W” shape and rotate the handle to lock into place. It will make a snapping noise once assembled properly.

Step 8: Slide Seat Column into the backrest plate on the floor board and tilt it upwards to lock into place. Buckle side of backrests into the sides of the combing.

Step 9: Repeat Set 6 but for the Stern: Push down, do not pull on the strap! Close Rear Combing latch behind the seat

Step 10: Locate Tension Strap located inside the hole underneath the bow combing latch fasten the hook onto strap loop and tighten. For maximum rigidity make sure the strap is tight. Using the foam block attached to the end straps, plug bow and stern and then stretch the neoprene fairings over the bow and stern and clip the buckles

Step 11: Stretch the bungee over the cockpit in a criss cross motion and then simply place the seat on the cock pit floor! Adjust Foot rests and seatback to your ideal position. Grab a life jacket and a paddle and you are off!

A lot of these instructions probably mean little unless you see the product so BAM video! 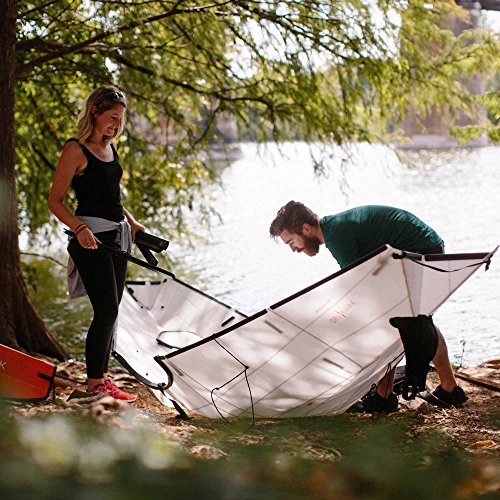 Step 4: The Folding Process begins! Fold the Ends inward and fold each end of the kayak like an accordion, use knee if necessary. Fold the two ends towards each other , push the orange and black arrows towards their targets. Compress into a box, connect the center straps, throw accesories into the box and place the floorboard on top, slide shoulder straps on and thats it!

I made the instructions so that it mostly coincides with the video so follow along! 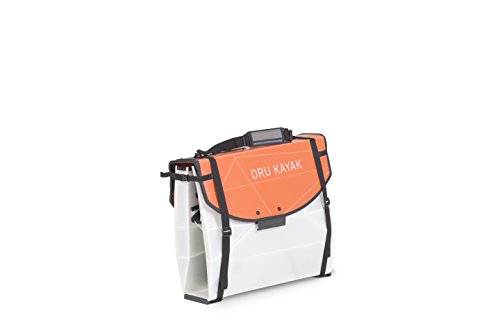