The performance and speed of the Sea Eagle Razorlite are on par with hard shells and you won’t get to see such speed in most inflatable kayaks.

It is long and has a very unique design which makes it stand out from other kayaks in the market.

If you love speed in a kayak, you are going to enjoy the thrill which comes in swooshing through the water in the Sea Eagle RazorLite 393rl.

Who is the Sea Eagle Razorlite 393rl for?

Since the kayak is meant for speed and performance, the stability is not great. That’s why it is best for kayakers who have intermediate to expert level skills. This kayak isn’t for a beginner.

If you want to paddle fast, want a kayak with good tracking and amazing performance on the water, then the Sea Eagle RazorLite 393rl is the kayak for you. You can use it on all types of water bodies including bays, lakes, oceans, and rivers.

The Sea Eagle RazorLite 393rl is an excellent kayak if you are planning on training and racing. It has the speed and the performance for racing. Though you can use it for fishing and recreation, it is best to use it for its speed and performance.

Portability and Ease of Use

The Sea Eagle RazorLite 393rl is very light at only 28 pounds. When it is deflated it comes to just 22″ x 22″ x 12″ which you can fit into the Sea Eagle backpack very easily. This makes it very portable and easy to transport. It is light enough for one person to carry. Even though the kayak is light, it can carry the weight of up to 500 pounds. The 393rl has the capacity to inflate within 7 minutes. This makes it very easy to use. You can use it in either freshwater or in the ocean.

The Sea Eagle RazorLite 393rl has a very unique hull. Unlike other inflatable kayaks which have hollow chambers and these chambers are inflated, the RazorLite works on a different principle. The kayak has three chambers which form the hull. The whole hull is made using drop stitch technology. Drop stitch technology means that the walls of the chambers are connected by thousands of threads that are high-tensile. Since the threads are very tensile, the walls of the chambers don’t expand too much due to which the pressure in the kayak is much higher than the pressure in most other inflatable kayaks.

This makes the hull very rigid even though the walls are very thin as compared to traditional inflatable kayaks. This makes it light and easy to carry along with improving its rigidity and performance.

It also gives the kayak a great length-to-width ratio so you get a hull which is sleek and long. 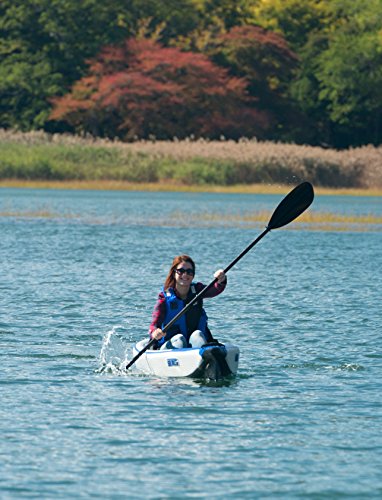 Speed is the best feature of the kayak when you are using it. The Sea Eagle brand has put in a lot of effort and focus to enhance the speed of the RazorLite 393rl. The moldings of the Sea Eagle bow and stern is a double-concave entry and exit system which is super-clean.

When the 393rl is cutting through the water, the air gets forced into these double-concave entry points. This lifts the bow and reduces the water resistance which increases the speed of the 393rl. The concave points at the stern allow the water to pass the kayak cleanly which creates no wake behind the kayak and reduces any potential drag.

The hull as mentioned earlier is designed so that it is long and narrow to give you maximum performance.

The stability of the kayak is the only major issue. Since the kayak has been designed for speed and performance, the hull is very narrow and sleek. This makes the RazorLite a bit tippy on the water. That is why this kayak is not suited for beginners. You need to be skilled to handle the kayak.

Though the Sea Eagle brand gives a lot of accessories, the objective of the 393rl is speed and performance. Due to this, the accessories that come with the kayak are lesser.

The pro package comes with the basic hull, a back seat which is tall, an AB40 paddle, a hand piston pump, a slide-in skeg, a repair kit, a backpack to carry the kayak when it is deflated and finally, a footrest. With the carbon package, you get an AB50 higher quality paddle. 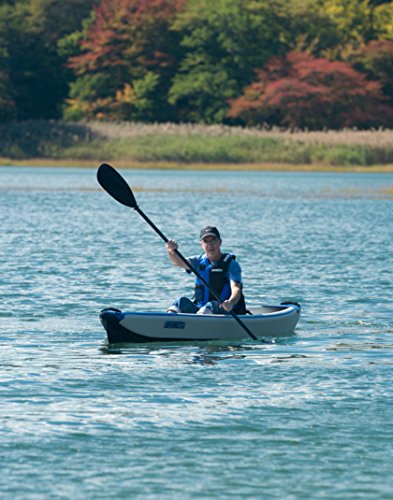 Most of the positive reviews online spoke about the amazing speed and performance of the kayak on the water. The price is great when you compare it to a hard shell kayak. It is very easy to inflate, deflate and carry.

The customer service of the Sea Eagle brand too was something that many reviewers were very impressed about.

The main points that stood out were:

There weren’t many negative reviews online and most of the comments which were positive had a couple mentions about the comfort of the kayak. The main points raised were as below: