Sevylor (owned by Outdoors Camping company Coleman) focuses on making outdoor inflatables. These include floaties as well as inflatable boats and inflatable kayaks. In fact they have been making them since 1949! The Sevylor Quikpak K1 is a great casual recreational kayak that is great for getting in the water with. How does it fare against other budget inflatable kayaks? Take a look below.

If you want an inflatable kayak that doesn’t take a lot of room, and go out for a couple of hours. The Quikpak is a good kayak to choose.  The Quikpak K1 1 person kayak is a hybrid between a floatie and a kayak. That’s not necessarily a bad thing as many people don’t want to lug a 30 lb inflatable kayak for a few hours. I will say that its durability is rather impressive for the price. What highlights this kayak though is the fact that it is easy to get in and out of the water! It also has a little bit of room at the stern of the kayak to put a small lunch cooler or other smaller miscellaneous things.

The Sevylor Quikpak K1 inflatable kayak is a solid hassle free option. It is not only one of the lightest inflatable kayaks around but also very easy to transport. It’s a great way to get people who have little storage space introduced to the kayaking world.

This sit on top kayak is great for people who want to buy something for a day on the lake. It is a great option as a starter kayak that won’t eat too much of your budget. In terms of quality the watercraft is pretty good for what it costs. Made of 21 Gauge PVC this craft has been known to take some of the punches making it rugged for lake use. It’s tarpaulin bottom provides durable protection from punctures which help protect it from submerged sticks, sharp rocks. In saying this don’t assume that the Coleman Sevylor Quikpak K1 is a godsend in terms of quality. With most inflatable items you will always hear about something popping.  With proper care you can greatly reduce the chances of that happening. Some things you can do are:

One of the biggest advantages of using the sevylor quikpak k1 kayak is the quick easy to inflate setup time. It has one of the quickest setup times for inflatable kayaks because it is a sit on top style kayak. This means less surface area needs to be used when inflating the kayak. If you compare it to a similar model such as the Intex K2 or the Intex Explorer those have a longer setup time because of the pure volume of air needed to inflate them. These are also decent solo kayaks that you can relax on for a casual paddle in calm water conditions.

Another thing I do like is the fact that Coleman (Sevylor) gives you all the accessories needed to get started at very little extra cost. This makes it easier for first-time kayakers to get out on the water without having to worry about buying a paddle, hand pump, repair kit.

hese two factors make this inflatable kayak hard to paddle in a bit of adversity.  This can be dangerous if you get caught out in the wrong conditions. A lot of this is partly due to the smaller skegs on the Sevylor Quikpak K1 kayak. They are not large enough to make the kayak truly “track”. Near my place there is a river that is controlled by the tide. I would not dare take this thing out, especially if the tide was coming in. In those conditions, even decent recreational kayaks can have some trouble but with this thing, you will not go anywhere.

The second issue is storage space. While the Sevylor Quikpak K1 does have a netted cargo area in the front it would only be sufficient to store maybe a six-pack or beverages at most. There is a bit of area behind the seat but it appears to be uplifted by a bladder meaning it would be hard to balance something on it. If you were looking for an inflatable boat that has better control in the water take a look at the Sea Eagle 330 line. 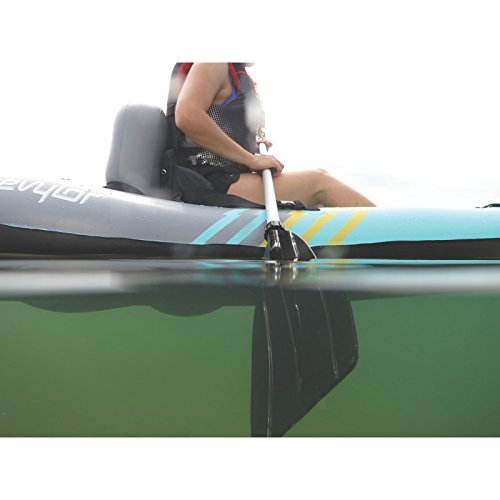 The theme with customers that have positive things to say about the Sevylor Quikpak K1  is the fact that it’s very convenient to use. They also mentioned that it is the perfect starting point for those who are starting out. One of the more interesting things I came across from my research is the fact that there seemed to be a general consensus among customers who were bigger people. They all seemed to like how the kayak handled and the fact that they felt super stable while paddling it in the water. They also stated that it is an easier watercraft to board and disembark. So if you are a bigger guy or gal looking to start kayaking this may be a good starter kayak.

Other customers complimented the K1 Quikpak on its ease of set up. Many stating that it is as easy to use as it is quick to set up. Because hardshell kayaks have a more difficult barrier to entry in terms of price and space needed for them. The Quikpak was great in this budget aspect.

Another common theme among customers was that they complimented the stability of the Quikpak K1. Many first-timers were comforted by the fact that it felt so stable in the water. This gave them a bit more confidence to explore in calm conditions.

Some of the main complaints directed towards the Coleman Sevylor Quikpak K1 is the fact that the nose would not keep a straight line while paddling. One customer pointed out that despite it having two smaller fins the on-water performance was inferior to the Intex K1 inflatable kayak. The main reason why is because, despite having one skeg, the Intex tracked better due to the fact that the fin is longer in width. I too can confirm this when paddling on my inflatable board. Without the long tracking skeg, the board is much more sensitive to paddle strokes in the water. As soon as the longer skeg is put on these issues disappear.

Others have stated that in terms of on-water performance this kayak is slow compared to more expensive kayaks. If you want to go kayaking with a friend that has a hardshell you will most likely have a tough time catching up to them in this kayak.

A few other customer complaints were directed at the accessories that came with the Sevylor Quikpak K1. A lot of people stated that the paddle is pretty flimsy and has below-average performance in the water. To combat this many customers got a better quality paddle to maneuver the kayak.

While many people were quick to compliment the kayak on its quick setup time. Others did not appreciate the fact that the kayak is hard to fit back into the backpack after use. This is often a common problem with inflatables. Sometimes you just have to use a different bag for it to fit correctly.

As we stated above the Coleman Sevylor Quikpak K1 is great for convenience and stability. But it leaves much to be desired in terms of pure on-water performance. This is where this kayak loses a good amount of it’s points. If you are looking for some kayaks that feature better on water performance look no further than some of these below.

Overall if you are looking for a starter kayak to get you introduced to the sport with 5 minutes setup time, then sevylor quikpak k1 is a great kayak to get. If you are desiring some on-water performance out of the gate. It’s best to look elsewhere like some of the alternatives I’ve listed.